Mary Edwards, later wife of John Jenkins, was born in Manafon, Montgomery. Church records are available and searches of the Manafon register shows a Mary Edwards daughter of Sarah Edwards, pauper, born 15 Aug 1792. This is the only possibility from the register, so if she was baptised, then this is she. I can find no other trace of the mother, Sarah Edwards. Scant census records point to a likely birth date of 1793/94.

The gazetteer entry for Manafon gives it "as a parish 8 1/2 miles (W. S. W.) from Welshpool, containing 775 inhabitants in 1833. This parish is situated in a mountainous, and is intersected by the river Rhiw, and also by the road leading from Llanvair to Newtown and Montgomery : it comprises an extensive tract of land, of which a considerable portion is uncultivated, and of the remainder, one-half consists of old enclosures, and the other has been enclosed and brought into a state of cultivation under the provisions of an act of parliament obtained in 1796. The manufacture of flannel is carried on to a limited extent.The church, dedicated to St. Michael, is an ancient structure. There is a place of worship for Welsh Calvinistic Methodists. A parochial school for the gratuitous instruction of poor children is supported by subscription. "

1819 Mary Edwards married at Llanllwchaearn by banns to John Jenkins on 1 Feb 1819 (witness Edward Jenkins and Thomas Howells). Llanllwchaearn parish is effectively Newtown, as it lies 1 mile east of Newtown, towards Abermule. Their son Thomas Jenkins was later born at Abermule. And my guess would be that John Jenkins moved to Newtown in the early 1830s as Newtown was expanding, while Llanidloes appeared to be accumulating industrial relations problems at an earlier date than Newtown. 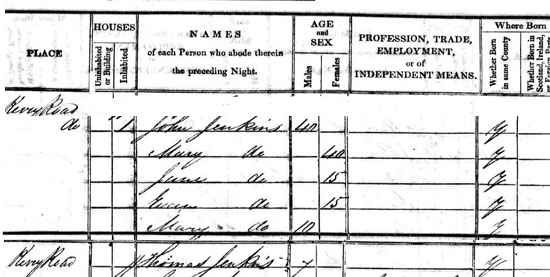 1841 census gives John Jenkins 40, born: Montgomeryshire, and Mary Jenkins 40, living at Kerry Road, Newtown with Jane 15, Evan 15, Mary 10 and Thomas Jenkins 7. This is in the parish of Newtown.

1851 census data appears to be missing for this part of Denbighshire, thus we are missing a link to the 1841 census, which itself is fairly basic in information terms. I cannot find Mary Jenkins, but I may have found her husband living alone as a boarder in Llanfair Caereinion . I have been through the enumerators books for Newtown and the family is not there. There is only one small book for Rhos, and I think there are three or four books missing for Rhos.

1861 census. I cannot find John or Mary Jenkins in this census

1871 census . We find John and Mary Jenkins again. The census puts them in Llangollen, next door to their son Thomas Jenkins and family. John Jenkins is listed as age 67, carder, born Llanidloes, Montgomeryshire, with his wife Mary, also 67, and born at Mynavon ( Manafon/Manafon, as Google has nothing for Mynavon), Montgomeryshire